Homeopathy for Children with Special Needs 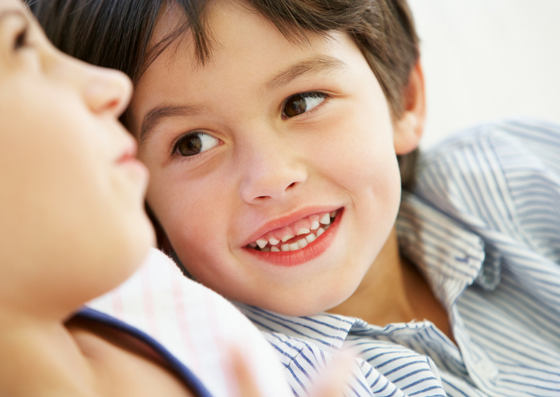 Homeopathy for Children with Special Needs – Background to the Study

Early in 2018, I set up a small study into homeopathy for children with special needs.  I offered 3 consultations over a period of 3 months or so.  Some parents opted for consultations by Skype while others came for clinic appointments.  Following the consultations, I prescribed individualised homeopathic remedies for each child.

The children had a range of diagnoses.  Some had physical disabilities, some developmental issues, some behavioural problems and some a genetic condition.  In fact, most of the children had a combination of these.  Their ages ranged from 2 to 11.

Data was collected using the patient generated outcome measure MYMOP.  Parents identified the symptom (physical or mental) that they were most concerned about in their child.  They also chose an activity (physical, social or mental) that they felt was important but which the worst symptom made difficult or impossible.  They scored the worst symptom and difficult activity on a seven point Lickert scale.  0 means ‘as good as it could be’ and 6 means ‘as bad as it could be’. In addition parents scored their child’s ‘general well-being’ according to the same scale. At subsequent consultations, they scored the same 3 items to provide a means of measuring change during the homeopathic treatment.

The children had 3 consultations. The scores from the initial consultation were compared with those from the 3rd.  Between these appointments they had been taking homeopathic remedies for about 2 months.  This is a very short time over which to assess progress in children with complex, long-term conditions.  My aim was to see whether I could demonstrate that some progress was possible in such a short time frame.

After their final follow up consultation, I calculated the average change in scores for each person.  All of the patients had improved according to the parents’ scoring.  I also talked to the parents about how they felt their child was doing at the 3rd consultation.  All said they had seen improvements, although some said they could not be certain that this was due to the homeopathic treatment.

Scores were broken down into worst symptom, difficult activity and well-being, and averaged over all participants.  The improvements were an average of 1.8 MYMOP points for the worst symptom, of 3.0 points for the activity made difficult by this worst symptom and of 0.8 in general well-being. This means that the average improvement across all 3 scores was 1.9.   I have presented these results as a bar chart below.  (Remember that 0 is the best score and 6 the worst.) 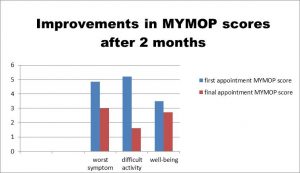 Statistical results were very encouraging given the short time frame of the study and the fact that the children all had significant long-term challenges.  They suggest to me that longer term homeopathic treatment is an option well worth considering for children with a wide range of special needs.  Some of the parents also felt this and have decided to continue with treatment from me for their child.  I look forward to continuing to support these children and their families and to seeing what further progress may be possible.

If you have a child with special needs and would like to talk to me about whether homeopathic treatment might be beneficial for them, please book a free introductory chat.  I look forward to hearing from you.