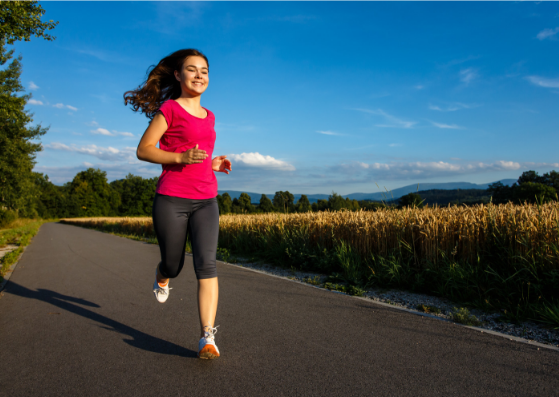 I would like to tell you about Josie, an 11 year old who came to me for homeopathic treatment for chronic fatigue and who is now back to the sports she loves.

I first met Josie and her mother by video call in February 2018 when Josie had been unwell with chronic fatigue syndrome (CFS) for 6 months.  She had been diagnosed with post-viral fatigue and blood tests suggested this was due to infection with Glandular Fever (Epstein-Barr Virus or EBV).

Josie had been an energetic and sporty girl, enjoying time at friends’ houses and competing in gymnastics and athletics until the summer before high school.  Then everything changed.

Her symptoms of Chronic Fatigue

Over the next few months, I prescribed a series of homeopathic remedies for Josie.  Her energy and appetite started to improve.  She was able to attend school part-time and her anxiety was reducing.

Back to School and Sports

By July 2018, Josie happily told me that she had been out to a friend’s house and had attended the last 2 weeks of the school term for normal hours.  Since then, she has been at school full-time and shortly after she also returned to training at her gymnastics club. I have continued to support Josie with her anxiety levels and she has gone from strength to strength since then.  She is now focusing on athletics and doing well in all areas.  I was delighted to receive a message from her mother last week, explaining that they needed to postpone an appointment as Josie would be competing in a national schools athletic competition.

Josie’s mother describes their experience of homeopathy of chronic fatigue in young people as follows:

“I first came to meet in Gill in February 2018, following my daughter’s diagnosis of post viral fatigue following possible past infection of the Epstein Barr Virus in Sept. 2017. During this time my 11 year old daughter was struggling with lack of energy and therefore unable to take part in her sporting activities, lack of appetite, anxiety and having to attend school on a part time basis.

Following our first appointment and in the subsequent months with the help of Gill and her excellent skills as a homeopath, we have watched our daughter steadily return to good health, and resuming all her sporting activities.

My daughter still sees Gill as I believe homeopathy has made such difference to her on both a physical and emotional level, and is an excellent way to maintain good health and well-being.”

The course of Chronic Fatigue Syndrome in Young People

Chronic fatigue in young people has a profound effect on education with many having to stop attending school or go in for reduced hours. Perhaps even more importantly, it impacts on social and emotional development as a large majority stop socialising with friends and drop out of clubs and other leisure activities.  This commonly leads to frustration and even depression at the restrictions to the life they might otherwise be leading.

The duration of illness and extent of recovery is highly variable.  A study of 784 young people  with chronic fatigue syndrome, published in 2019, found that:

Homeopathy for Your Child with Chronic Fatigue

If you opt for homeopathic treatment for your child, I choose remedies that match their individual symptoms, taking into account the way the illness is affecting them most.  Homeopathy can help with physical, mental and emotional issues.  It is therefore well suited to an illness which often has marked effects in all these areas, such as:

Homeopathic treatment will not be an instant fix.  However, I have seen it bring steady improvements to young people with whom I’ve worked, enabling them to get back to their hobbies and education.  As well as Josie’s story here, you may like to read about Megan’s recovery from Chronic Fatigue Syndrome.